A sperm whale found dead on a Scottish beach had 220# of literal garbage in its stomach, probably contributing to its death. On the other side of "the pond", PA Game Control is looking for at least two boys for torturing a buck (including ripping off his antlers while he was still alive.)

I won't attach the articles due to the content, but one can find both online, if desired.

s are available for "therapy".

He fought off three coyotes that had him trapped until his humans came looking for him.

First, a coyote grabbed a young child and the child's father literally strangled the coyote with his bare hands.

Second, a mountain lion attacked a toddler, grabbing his backpack. The big cat ended up "humanely euthanized" after s/he was treed with the backpack.

I won't link the articles due to the nature of both attacks.

This was the article that sparked my diatribe: https://www.yahoo.com/finance/news/us-seeks-tighten-rules-covering-161059718.html

I can take an antihistamine: some people actually need to have a dog with them 24/7 due to legitimate medical reasons.

Basically, the article says that the animals that were in the Wisconsin Humane Society have found either foster or "furrever" homes, leaving an empty shelter, ready to close during the covid-19 situation.

Some cute photos (I think that this particular animal is native to Down Under, but don't quote me): https://cheezburger.com/11096581/qu...-their-extremely-infectious-smile-cute-photos

I'm not sure if this was posted elsewhere, but two cats in New York were diagnosed with Covid-19 earlier this month (one caught it from their human companion, the other had a Covid-19 case of "unknown origin" [nobody in their household tested positive for the virus].)

This can also be posted w/ COVID-19 information: https://www.yahoo.com/news/cats-without-symptoms-spread-coronavirus-151422919.html 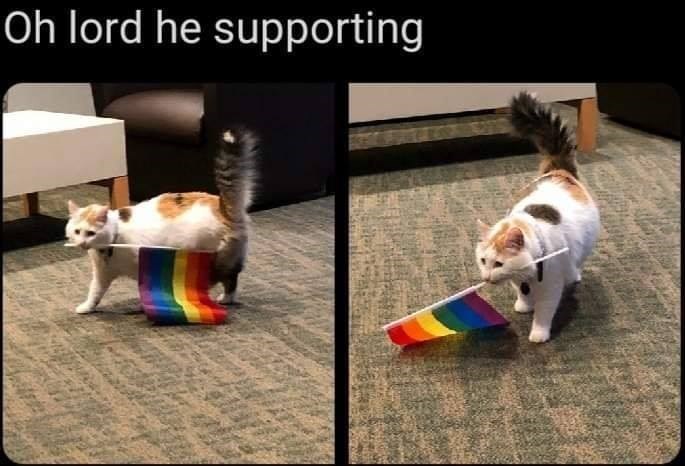 A baby seal was rescued from a hole in a boulder pile that she fell in: https://cheezburger.com/11956229/a-...-a-tiny-seal-who-was-stuck-in-rocks-for-hours

They are kinda cute imho.

A Golden Retriever rescued a koala joey and brought him/her home with them (from my DreamWidth feed):

"A thread for discussions related to the interactions of humans and animals."

A rather unique interaction.
https://www.thedodo.com/daily-dodo/crowd-of-giant-crabs-decides-to-crash-familys-picnic

The creatures are respected and do not do any harm, so they are not harmed in return, despite the 'monster movie' overtones. We could learn a lesson here, perhaps.

Something that might be of interest to the Australian delegation: after 3,000 years, Tasmanian devils are being reintroduced to Mainland Australia! https://cheezburger.com/12656901/tasmanian-devil-is-back-in-mainland-australia-after-3000-years

Just found out that Petco is removing "shock collars" from their stores, both brick-and-mortar and online! Here's more information: https://www.cnn.com/2020/10/06/business/petco-shock-collars/index.html

I'm not sure if anyone here is interested in this, though...

Phyllis Sidhe_Uaine said:
Just found out that Petco is removing "shock collars" from their stores, both brick-and-mortar and online! Here's more information: https://www.cnn.com/2020/10/06/business/petco-shock-collars/index.html

I'm not sure if anyone here is interested in this, though...

I am interested. I am too old and 'decrepit' to be able to walk a dog long distances anymore. But when I had them, I never used a shock collar or any physical punishment. I always thought that bark activated shock collars were ridiculous. Dogs bark for a reason. Find out what the reason is. Human activated ones are even worse. The dog has no idea why it is being shocked. If she is doing something unacceptable, a sharp NO to get her attention, and a explanation, with pointing and head patting, of what not to do works.
You must log in or register to reply here.
Share:
Facebook Twitter Reddit Pinterest Tumblr WhatsApp Email Share Link
Top