A Tribal Woman to be the next Indian President

Draupadi Murmu, 64, a former teacher and a tribal woman from Odisha is gong to be the next president of India. Of course, an election will be held in which all members of the two houses of the Indian Parliament and members of the State assemblies will cast the votes. But BJP, the ruling party, and Prime Minister Narendra Modi, have the numbers and there will be no problem in her being elected. The current Indian Presdident Mr. Ram Nath Kovind, belongs to the Scheduled Castes. Both the so-called 'lower castes' and tribals are wrongly designated as 'dalits' (oppressed) by Christian and Muslim missionaries, and political parties in opposition (including the former Nehru-Gandhi dynastic party, Indian National Congress, which ruled India for 55 years).

Aup. is mighty happy about it, both for the nominated Presidential candidate as well as the continuing success of ruling party, BJP.
BJP is likely to return to power within a few days in Maharashtra (Mumbai). The current ruling coalition is disintegrating. 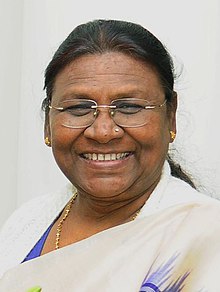 Can you help us as to what tribal means?

Aupmanyav said:
Aup. is mighty happy about it
Click to expand...

So it can't be a bad thing

wil said:
Can you help us as to what tribal means?
Click to expand...

Aboriginal people generally living far from urbanized places. Draupadi Murmu belongs to the Santal tribe. That is the largest tribe in India, some 6.5 million people. They speak a sub-family of Austroasean Munda language known as Santali. Santali is one of the 22 National Languages of India. https://en.wikipedia.org/wiki/Santal_people

Apart from some less than 10% people (Aryans, and Muslims who came during the Muslim period of Indian history), the rest of Indian people can be taken as indigenous - people who arrived from Africa 70,000 years ago and migrants before the coming of Aryans, whose origins are not known, but again generally from North-West - Dravidians (?), some 40,000 years ago, as some geneticists opine, the second wave.

No such decision is without political considerations. By making a Santali women the Presidient, BJP hopes to get their support in the States of Jharkhand, Chhattisgarh, Bihar, Odisha, and more importantly, in West Bengal, where a staunch anti-BJP party is ruling. This may also help them to get votes from other tribal people.
That is 'behind the scene picture'. Of course, Draupadi Murmu is a long-standing member of BJP.

All this is OK, but as an orthodox Hindu, I do not like that the Presidential candidate took the help of a non-traditional personality cult (Brahmakumaris) in her time of distress when she lost her eldest son (her other son and husband also died early. She has a surviving daughter and grandchildren). Now the cult will boast about that. Though I am an strong atheist Hindu, I still follow traditional Hinduism. Even Sankara did not accept the existence of any God at the highest level of reality (Paramarthika Satya).

Does the President have power, or does power rest with the Prime Minister?

President has power. The President is the Commander-in-Chief of Indian Armed Forces. The President can stop any Prime Minister for not following the law. Even the Courts have that power. Remember, that a decision of a State High Court declared the election of Mrs. Indira Gandhi invalid. That is why she imposed 'emergency' with the connivance of the then President, Gyani Zail Singh. After that, the Indian Constitution has been amended to make that possibility even more difficult (I have not gone through the details). Indian Constitution is a very good piece of legislation. Has served us well for the last 70 years. Thanks to the British. A few things are sacrosanct in India - The Constitution, Supreme Court, Election Commission and Indian Armed Forces.

"On 12 June 1975, Justice Jagmohanlal Sinha of the Allahabad High Court found the prime minister guilty on the charge of misuse of government machinery for her election campaign. The court declared her election null and void and unseated her from her seat in the Lok Sabha. The court also banned her from contesting any election for an additional six years. Serious charges such as bribing voters and election malpractices were dropped and she was held responsible for misusing government machinery and found guilty on charges such as using the state police to build a dais, availing herself of the services of a government officer, Yashpal Kapoor, during the elections before he had resigned from his position, and use of electricity from the state electricity department."
https://en.wikipedia.org/wiki/The_Emergency_(India)#Raj_Narain_verdict

Ordinances remain valid for no more than six weeks from the date the parliament is convened unless approved by it earlier. .. The promulgated ordinance is treated as an act of parliament when in force and it is the responsibility of the president to withdraw the ordinance as soon as the reasons for the promulgation of the ordinance are no longer applicable.

Per Article 74 (2), the council of ministers or prime minister are not accountable legally to the advice tendered to the president but it is the sole responsibility of the president to ensure compliance with the constitution in performing his duties. President or his subordinate officer is bound by the provisions of the constitution notwithstanding any advice by the union cabinet. As per Article 142, it is the duty of the president to enforce the decrees of the supreme court." Etc.
https://en.wikipedia.org/wiki/President_of_India
Last edited: Jun 25, 2022

I was expecting a quick victory for BJP in Maharashtra, but it is going to take more time. The Supreme court accepted the plea of the dissidents of one party, Shiv Sena, where 40 of its members out of 55 have decided to align with the BJP to form a government. But Supreme Court has given July 11 for the next hearing. So only towards the end of next month. Court cases take time.

The Mumbai Governer brought the case to a close by ordering a head-count in Maharashtra Assembly. The Chief Minister, who did not have a majority resigned. BJP-Shiv Sena coalition got the offer to form the Government. They did it but with a twist. The minor party leader with 39 members was made the Chief Minister and BJP with 106 members opted to make their leader the Deputy Chief Minister. Of course, they will have more ministers in the cabinet, nearly double the number of ministers from Shiv Sena. The new government took the oath yesterday.

ps: There has been a Al-Quaeda type beheading in India by Muslim fundamentalists connected with Pakistani terror groups Dawat-e-Islami and Tehrik-e-Labbaik based in Karachi. The two accused and 8 members of their group have been arrested, investigations are proceeding.
Last edited: Jul 1, 2022

Political compulsions. The BJP leader is a Brahmin (Brahmins make just 3% of the population in Maharashtra) and the Shiv Sena leader is a 'Maratha' (Like Shivaji who fought against Aurangzeb). Marathas make 30% of the electorate. Since the new Chief Minister is a 'Maratha', 'Marathas' in other parties cannot fault it. Moreover, it will help him dislodge the son of the Founder of Shiv Sena, and the former Chief Minister, Uddhav Thakrey, who was trying to establish a dynastic rule. BJP hates dynasties.

Current political map of India:
Dark and Light Orange (BJP or BJP+), Dark and Light Blue (Congress or Congress+), Ochre (Others various).
In Tamilnadu, Congress has a nominal participation. 18 out of 234. The ruling party by itself has the majority. 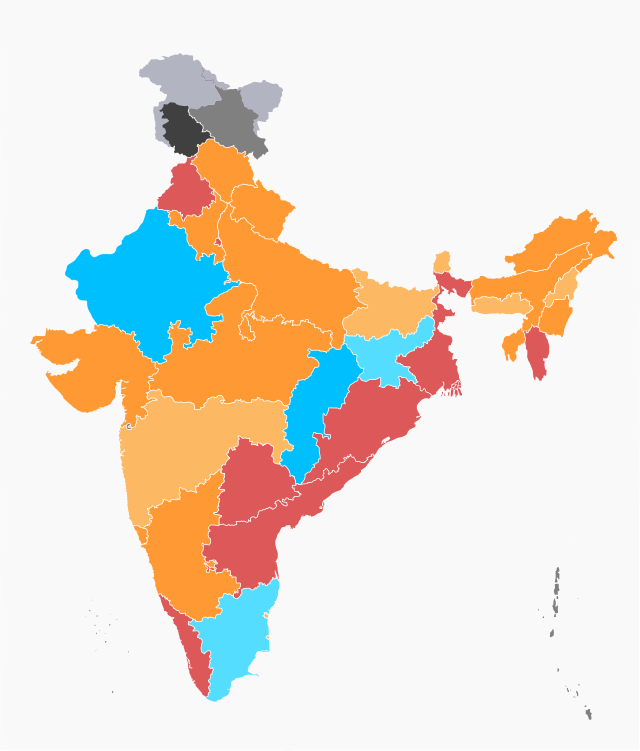 Dropadi Murmu easily won the Presidential election. She would take the Oath of Office on the 25th. The final scores were 64% for Murmu and 36% for the opposition candiate, Yashwant Sinha (an estranged former BJP miniter during Mr. Bajpai's tenure, 1998-2,004).
Interestingly, 17 members of Parliament and 126 members of various State Assemblies from Opposition parties voted for President Murmu. Some of these are likely to join BJP in time.

Now the contest is for the Vice-Presidential vote. BJP nominee is Jagdeep Dhankhar, and Ms. Margret Alva, a former Minister in the Rajiv Gandhi's tenure (1985-99) and Governor of various states during 2009-14. The election will be held on August 6.
However, the West Bengal Chief Minister, Mamta Bannerjee, has stated that she would not support Ms. Alva. Mamta, otherwise is a strong opponent of BJP. President Murmu's daughter and grand daughter. She lost two sons and her husband. 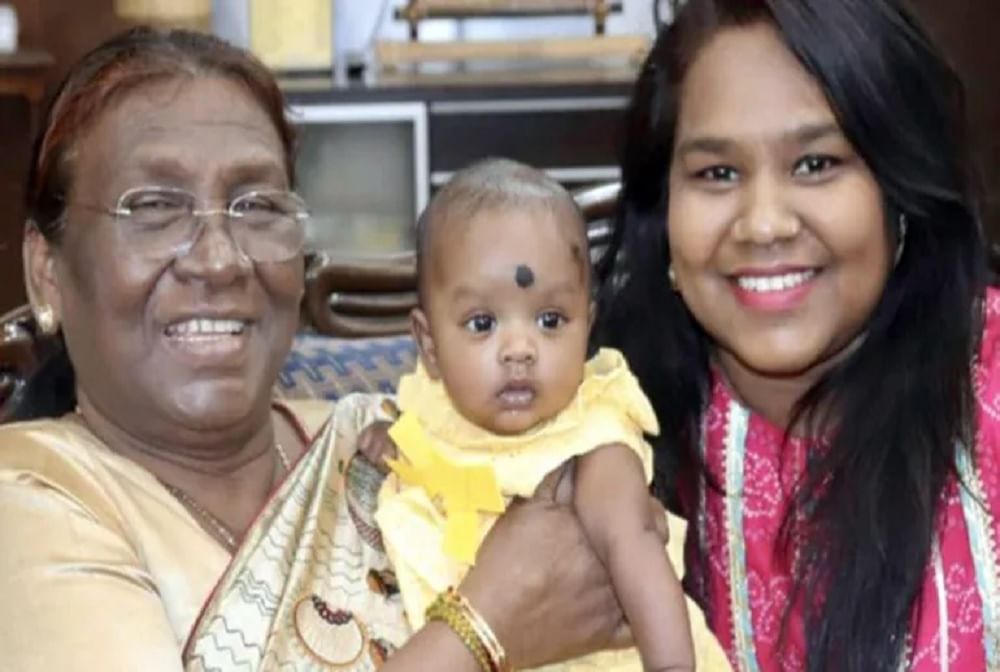 wow that is nice ! lets see what happens the future ?

davidsheep88 said:
wow that is nice ! lets see what happens the future ?
Click to expand...

Nothing much. She will serve the nation for five years and then there will be a new president. I do not think that she will have to face any special situation. But there will always be Judges, Chief Ministers, members of Parliament and legislatures, from among the tribal people. They will be there is all walks of life - Armed forces, administrators, police, education, business. It is a requirement of Indian Constitution that they get 7.5% of the positions - which is their percentage in Indian population.
You must log in or register to reply here.
Share:
Facebook Twitter Reddit Pinterest Tumblr WhatsApp Email Share Link
Top