Namaste Jesus said:
Our niece and grandnephew will be joining my wife and I and the furry ones this year. We got a small turkey for the occasion or "Ah Erd" as Jackie, who will no doubt be supervising the preparation of, calls it. Sweet 'tators, broccoli stir-fry, cranberries, gravy and Chai will round out this year's fare.

Praise Be and Thanksgiving to all....
Click to expand...

Fond memories of Turkey Day at your place. - 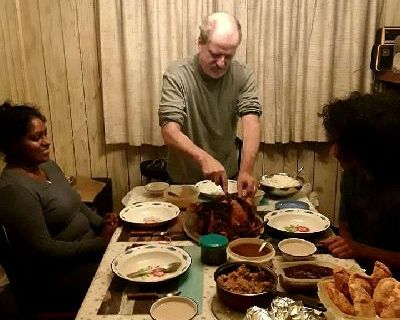 Did a Friendsgiving this year. Lots of food, lots of people, and lots of animals (cats, dogs, and birds...oh my!)

Another American Thanksgiving over and done with.

s got cooked ham and turkey-flavoured treats (although they turned their noses up at the ham [will toss it out later]) and I had vegetarian "turkey" with a kale and cranberry stuffing to make up for that. I also made a pumpkin cheesecake, tucking remainders back in the refrigerator each time after taking a serving (forcing myself to do that so I don't inadvertently cause untold damage to my body.) The neighbor that makes the peanut-butter-and-jelly-glazed abomination stunk up the place (again.)

I avoided the movie-of-the-week, Silver Linings Playbook, but might go to next week's (Singing In the Rain.)

Now, I have to make the curried pumpkin bisque (a "command performance" iykwim) but first I must get all of my pots and pans washed as well as my ladle...

Belated happy Thanksgiving to the Canadian delegation. I hope that this year's festivities weren't too jarring.

Blessed Thanksgiving to the Canadian delegation from the

Another American Thanksgiving has come and gone with the

s. They had turkey and duck/turkey and halibut tinned food while I had veggie "turkey" in a couple of ways (breaded cutlets with gravy for lunch, kung pao for dinner.) One of my neighbours tripped over the dinner that was left outside my flat (no, I didn't sign up for it before anyone asks!)

Had to have some emergency dental work just before the festivities so turkey will stay in the freeze til Christmas this year. Instead the wife and I spent a quiet evening at home, eating curried chicken stew over rice, with vanilla pudding for desert. it's been a trying year to say the least, but all in all, still a lot to give thanks for.

Ella S. said:
I had a vat of mashed potatoes and a whole vegan pumpkin pie before finishing a bag of corn chips and salsa from a church fundraiser
Click to expand...

Oh my, I only put asparagus, a roll, some salad, a tater, and squash on my plate....and only finished my asparagus!

Happy Turkey/"Turkey" Day to the American delegation from the

Picked up some turkey and duck shredded gooshy food for The Trio and a vegetarian "ham" along with a pie pumpkin for me. Oh, and vegetarian kasha to go along with everything.

Why we needed a 30 pounder for 3 people is beyond me, but I suspect the little critters around here will be happy about it!

Namaste Jesus said:
30lbs bird in the oven as we speak! 🦃

Why we needed a 30 pounder for 3 people is beyond me, but I suspect the little critters around here will be happy about it!
Click to expand...

I wonder how many

s visited your feast, eyeing the bird, cabooses doing that particular wriggle (you might know which one I mean.)

Phyllis Sidhe_Uaine said:
I wonder how many

s visited your feast, eyeing the bird, cabooses doing that particular wriggle (you might know which one I mean.)

Well, dinner's over, leftovers contained and turkey discards deposited for the wild critters. Thus far, 3 raccoons, 2 opossums and 1 fox joined Be Bop and Midnight in the feast. For the most part, the fare was well received, though there was some grumbling over the garlic gravy... 😒
Last edited by a moderator: Nov 25, 2022

First family holiday I have been functional and participatory at in over 4 years, it felt good.

Well, 2 days after the great pig-out and I've but 3 words to say... Fried Turkey Sliders! 😋

"Ham" and cheese pinwheels! I've added some other items from my Thanksgiving meal to the pinwheels to balance out the flavours.

s are getting turkey and duck shreds tinned food (as usual.)