That soft feet can dance
Across the hard-packed loam of my heart
The Sun's gentle rays can reach
Through the thickets, all the way down,
Roots can tap deep endocrine currents,
Beauty can touch recesses of my being,
Is life-giving love.

As I look for empty pages
Leafing through a notebook
There are ornate diary entries
Scribbled notes
Grocery
Equations and vocabulary
And the pages at the back torn off
By the Muse holding on for her life
Last edited: Nov 3, 2019

The chiselled sandstone ledges of the old bell tower
Have been freed of their anti bird spikes
And, piled with straw and moss,
Await the pigeon's return to their roosts
In a gesture of vacant fluttering invitation.

A person prays for some relief,
but to no avail,
All seems hopeless, no escape
and then
one drop of nectar changes it all.
A cruel trick to create
something so beautiful
and
something so terrible.
Are these the two poles poets & seers have spoken of?
Must we swing 'twixt the two?

A nighttime alley full of silent cars before me
Behind, the rain-wet courtyard fragrant with urine
White plastic tarps heave and billow to my left
Droning chimes ring to my right, a wind-swept scaffolding
All around, the streetlights flare
And afterimages stand like tags and graffiti inside my eyelids.
Last edited: Apr 6, 2021

As the Sun rises thru the trees in the garden,
I see starlings galore nipping at the coconuts.
Other birds also visit sharing such excitement.
An elegant site as the day starts to create itself.

Indeed, my observation & feeling such an event is part of the day's creation.

Tethys rolling lazily in her pool
Translucent bulk smooth with scaly blue
The flow of her currents inexorable
Down my neck and spine
Petrifying
Electrifying
Rigid stillness in the raging torrent of her comprehension.

I had a great grandmother who was over 90 years old when she died of COVID a couple of years ago. To her, the Great Depression was her childhood, not something out of a history book.

When I was a kid, she would tell me what it was like for her when she was a kid almost 100 years ago. I remember thinking how people back then were just like people now and how she had lived my own age several times over. The breadth of her experiences was incomprehensible to me.

And then I think about the things she told me about her parents and her husband, long dead before I was ever born. How much she loved these people. How real those people were to her. And how those people, like me, lived full lives over a century ago with the same youthful concerns once upon a time and even their own parents.

I think about what it must have been like to grow up in the 19th century in America. Older people around you always talking about how young and new the country is. The founders of your country die when you're too young to really understand who they are or what they represented. You see the Westward expansion and many marvelous inventions. As a kid you used a telegraph, in your age you use these things called telephones. You walk everywhere in town and have to pay a cabby if you want to go outside of it, but the busy, packed streets are always quiet at night.

Your great grandparents grew up in the 18th century. They came over to the 13 Colonies on a boat with their family, knowing that they would probably never see their home again despite the thinly-veiled promises of their parents. They saw the colonial politicians whip people up into a frenzy and the crown meet them with callousness. They had a soldier living in their own house and they had to keep their voice down when talking about anything he might disapprove of. They saw their country plummet into war in their backyards but maybe never saw a battle themselves.

Between me and these people are about 10 generations, but they seem so much closer and real now. Yet we can continue going back, century after century, as almost everyone who has ever lived is dead now. Countless lives filled with their own dreams, joys, regrets, sorrows, loves, friendships, hobbies, preferences, skills, all now lay silent and forgotten.

At some point, language breaks down to little more than a few gestures and tonal sounds and we are before the invention of clothes. We still use tools to hunt and gather in groups. We still have friends and lovers and enemies. We have tragedies as friends are taken from us by predators when they wander too far from our shelter under the trees by the lake. Occasionally, we see other animals come by to drink from our lake, but they mostly keep their distance; they are as afraid of us as we are of them.

And we can keep doing this down our evolutionary chain, slowly going further and further back, until we realize how incomprehensibly old life is. In our attempts to understand the vast abyss of time that lays behind us, we surpass the limits of our ability to truly grasp the length relative to the time we have lived and all of the intellectual signposts we use to demarcate the past strip down to nothing but pure awe.

And then we can do the same thing with the age of the universe compared to the age of life on earth, which is several magnitudes greater.

Then we can start again. Think about how big the earth is to have held all of these stories within it. How many places there are that you have never seen and never will see. How many places remain just a picture in a book or a setting in a movie. Google Earth is great for this when you compare what you see to when your plane takes off from the ground. So high above the planet that people are invisible and houses are tiny specks dotting the land and yet you still aren't high enough to truly see the curvature of the earth.

Zooming out, little by little, you realize how small we are on this planet. And then you see a more accurate model of our solar system, where the planets aren't crammed together but the wide spaces between us appear. Every planet in the solar system can fit just between us and the moon, with room to spare.

The size of our solar system itself is already incomprehensible, with a sun that could fit over 1.3 million earths inside of it. That's a million. That's a thousand thousand, and a thousand itself sometimes strains our understanding and is easier broken into a hundred hundreds. So that's a hundred-hundred hundred-hundreds. Of earth. Of the thing that we are infinitesimally small on.

But our sun is actually tiny. From the nearest stars we can see, its light is almost invisible because of how pathetic it is compared to the other stars in our galaxy. There are about 100 billion stars in our galaxy, in fact, as far as we can tell, and they are spaced out further apart from each other many times greater than our entire solar system is wide. 100 billion is incomprehensible. It is 100,000 times bigger than a million, which is 1,000 times bigger than a thousand. If we were infinitesimal before, we now have vanished.

Now take a look at a tiny patch of black in the sky. Find a small one between the stars and focus in on it. In just that location, look at how many galaxies we have, each with their own 100 billion stars, give or take: 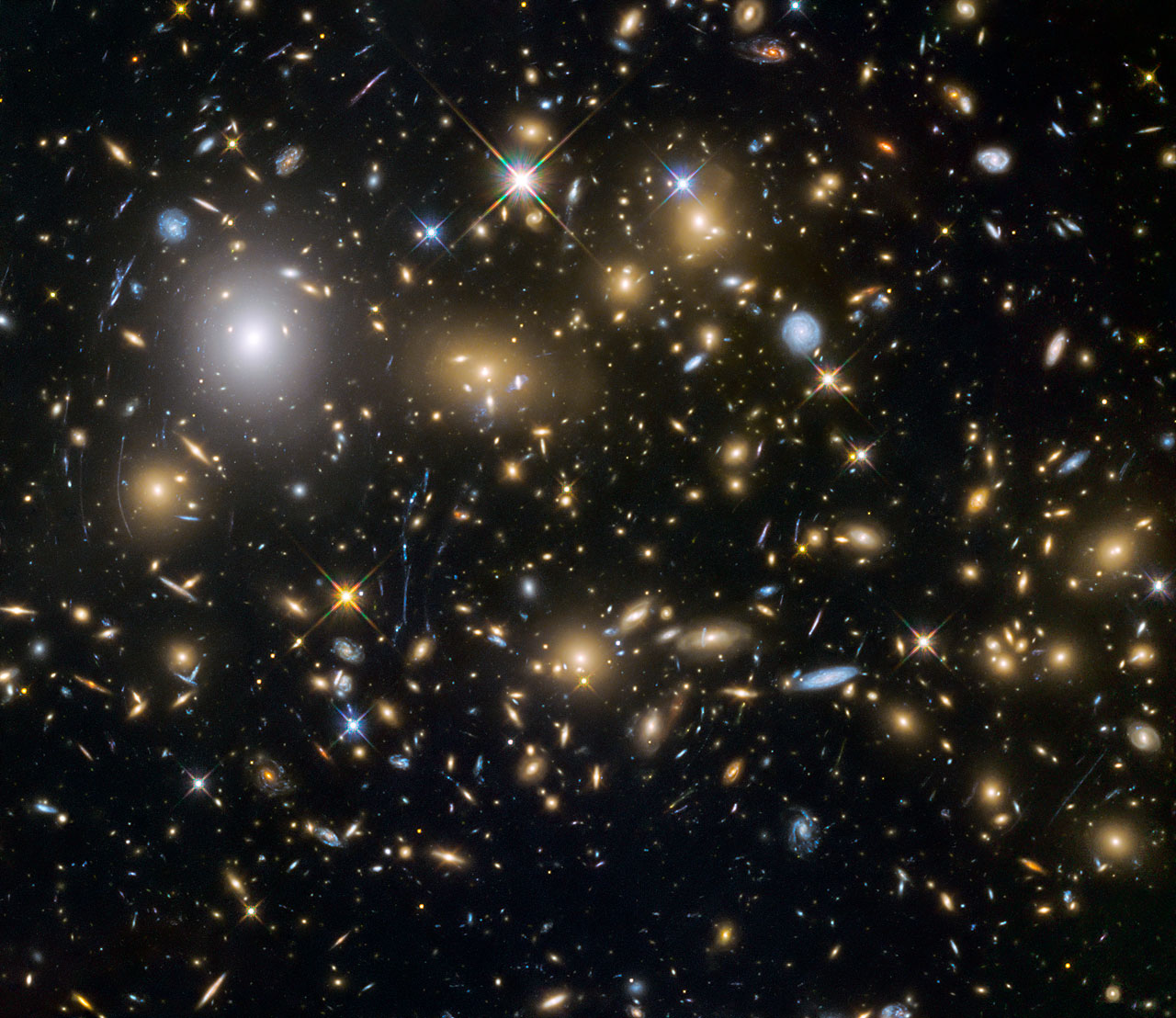 Do you know how many of these we have in the observable universe? 2 trillion. That's a billion million. And each with 100 billion stars, each the size of 1 million earths, and earth itself drenching us. Here, once again, we can only be filled with awe. We are a part of a universe so much older and bigger than us that it is incomprehensibly, incomprehensibly incomprehensible several times over.

In the deserted city,
Straight wide streets weaving claustrophobic mazes,
At that point where city turns to woodland,
The three of us caught sight of you,
But kept silence, circumambulating
A pole in the mud at the center of forgetfulness,
Waiting for the signal from Her,
Who keeps turning the grindstone, the wheel, the spindle.

(not based on my own experience, but posted with permission)

How we spoke
how the silence matched our words
utterly

And how we drank
down
unfathomably the light of life

We danced, we circled
opposite, complementary, counter-wise
how closely