The Jewish rabbis have a rabidly exalting yet acidic exacerbating interpretation of the Torah in the Zohar, which is what makes it at once mysterious, yet exhilarating to crack open the multitudinous hard nut shells of their arguments, expositions, and commentaries. Here is mystery of supernal mysteries! And yet there are clues within the Zohar about what it is they, in point of actual fact, are doing, and it is entirely sensible! Contradiction of contradictions! But we have to have a key to their symbols, to what their allusions are pointing to.


It is difficult to say what part of the Bible has had more commentary and interpretation, but Genesis 1:1 certainly has to be included within this orbit of exegetic analysis performed on the Bible through the centuries. Many biblical scholars analyze it with the comparison of the Babylonian creation account The Enuma Elish and Mesopotamian along with Ugaritic texts.[1] Genesis is nothing actually unique, just another run of the mill creation account which are manifest throughout the Ancient Near East by dozens of ancient empires and their own creation myths. This has been the more or less mundane exegetical conclusion to it all. Is this all there is? By no means at all.


It wasn’t until later in Christian times when Creation Ex Nihilo was proposed and defended in early Christian cosmology, by the early Christian Church Fathers, based upon the interesting fact that it “is a polemical doctrine invoked to defend the belief in bodily resurrection!”[2] The Jews had never had anything like a systematic theology having to do with much of a resurrection, so they didn’t worry about it since their view was that “God created from pre-existing matter,” even up into the Middle Ages.[3]


The Zohar takes us to a different dimension than even these. The sacred dimension of geometry. And they don’t do so with clarity, but they make us dig, and dig deep. It isn’t easy, it’s downright mystifying because they are mythologizing their sacred narratives giving us a “secondary mythological order” giving greater cosmic meaning to the geometrical constructs based upon the language, essentially an extension of the text, due to its being a “most precisely mathematical model having its own scientific validation.”[4] In essence, “mythology recapitulates geometry. This is not to deny the truth of such mythology but to recognize it as a second order of truth, one based upon the absolute truths of its geometric models and giving to each systematic interpretation the quality of secondary or symbolic truth. For geometry is, indeed, a form of language that expresses ideas which the deep structures of the mind can recognize intuitively and for the reason that this deepest level of mental perception would seem to be encoded in such geometric archetypes. The persuasiveness with which geometric forms can be associated with mythological symbols further suggests that the mythological and geometric levels of the mind lie close together and that it is in terms of such mythology that the mind first interprets its geometric understanding into linguistic symbols…[their] explanations of the Torah is “a fact that serves to validate their mythology as symbolic expressions of absolute truths.”[5] In point of very fact, It is precisely the controls involved in the actual construction of geometric models that give to such models a truth value lacking in an arbitrary ‘invented’ theoretical model.” What we have is something quite startling, quite delightful, quite ennobling and beautiful. “The association of a particular geometry with biblical and kabbalistic texts, the geometry serving to order and validate concepts of the specifically earlier Jewish tradition and these concepts providing a reciprocal enlargement of the diagram’s power of signification by demonstrating its power to model them.”[6]


This paper just gives the bare opening evidence of just such a fabulous geometry in the Jewish esoteric tradition to give us a feel for the world of awe opening up in front of our very eyes with how the Zohar is guiding us to this amazing revelation of truth and power.


We begin our journey with בראשית ברא אלהימ (Bereshit bara Elohim - Hebrew reads from right to left), the first words in the Bible. One of the most famous Jewish commentators, Rashi, noted one Jewish view that other biblical scholars have come around to agreeing with on grammatical analysis - “If you would come to explain it according to its simple meaning, explain it as follows: In the beginning of the creation of the heavens and the earth…”[7] Gary Anderson lays out the issue clearly, is the open phrase a prepositional or a temporal clause? In other words is this an absolute beginning, or does a translation such as “When God began to created the heavens and the earth…” work?[8] But the Zohar doesn’t even care about this either, at least not at first. How does it work with the beginning of creation as recorded in Genesis?


“Rabbi Yudai said, ‘What is בראשית ( Be-reshit)? With Wisdom. This is the Wisdom on which the world stands - through which one enters hidden, high mysteries. Here were engraved six vast, supernal dimensions, from which everything emerges, from which issued six springs and streams, flowing into the immense ocean. This is ברא שית (bara shit), created six.”[9] The Rabbi here splits the first word in an unusual fashion, not grammatically, but to entirely give a different esoteric meaning! It now means, based on his change “created six,” not “In the beginning, the traditional translation.


Incidentally this has a direct parallel to John 1:1 the Greek being Ἐν ἀρχἡ ἦν ὁ λὁγος (en arche en ho logos), in the beginning was the Word… This is the nature of the beginning mentioned in the Hebrew of Genesis 1:1. Gunther Schwarz noted in 1956 was discovered an exciting Palestinian Targum that read like John 1:1 - “Von Amfang her mit Weisheit brachte hervor (das Wort) Jahwes und vollendete die Himmel und Erde. Und es beendete das Wort Jahwes am siebsten Tage sein Werk, das es hervorbrachte... Erregend sind diese Zeilen deswegen, weil in ihnen, in einer typisch targumischen Paraphrase (inhaltlich vollig aquivalent), ausgesprochen ist, was wir bislang so nur aus dem Johannesprolog kannten.”
(From the beginning with wisdom brought forth (the word) Yahweh and perfected the heavens and earth. And the word of Yahweh ended his work on the seventh day, which it produced ... These lines are exciting because in them, in a typical Targumian paraphrase (completely equivalent in content), what we have so far only found in the prologue of St. John.)[10] The Targums were the ancient Aramaic translation of the Torah.


The Zohar idea is fascinating with “the basic geometric progression from point, through line, to circle, and then to the marking of radial arc points is described in relation to the first processes of creation” ;The Most Mysterious struck its void, and caused this point to shine. This beginning then extended, and made for itself a palace for its honor and glory… from this point onward bara shith, he created six.’”[11]


This then is describing a geometric process. As Leet describes it, we grasp what is going on here. “The six vast, supernal directions would have to be those defined by the six points inscribed on the primal circle in the regular procession of geometric growth… the next stage here being suggested for the creation process, the joining of these six radial arc points in the form of a hexagram, would also seem to be suggested in the Baraita de Ma’aseh Bereshit:


HE EXTENDS THE HEAVENS AS A VEIL.

Why are they called heavens? It is because the

Holy One, Blessed be He, had mingled the fire

with the water, spreading out the one with the

other in creating the heavens, as it is said: IT IS

MY HAND WHICH HAS FOUNDED THE EARTH

AND MY RIGHT HAND WHICH HAS

STRETCHED OUT THE HEAVENS. You shouldn’t

Read it as ‘heavens’ but as ‘fire and waters.’

He formed seven abodes on high… He

Stretched the heavens above.[12]


The idea of the creating of the fire and waters is given in geometric terms as the conjoining of two triangles, an up pointed and down pointed that have joined together in the Star of David, or the Seal of Solomon. This is done by connecting the six primal dots on a circle created with a compass, using the same length of the open arms of the compass which created the circle, to then mark six points along the circumference of the circle. It is from those six points that we connected into a hexagram. The Creation is all about sacred geometric processes. She has much more along this line, as do the rabbis in the Zohar who expound upon exposition of this, ever elaborating with more and more detail, of which I will continue in another paper. This one gives you the idea, which I also have shared a drawing with you showing it geometrically. This is but the first geometric diagram the Zohar talks about, and I will show others at a later time. Illustration below the endnotes...

12. Leonora Leet, The Universal Kabbalah, Deciphering the Cosmic Code in the Sacred Geometry of the Sabbath Star Diagram, Inner Traditions, 2004: 12. 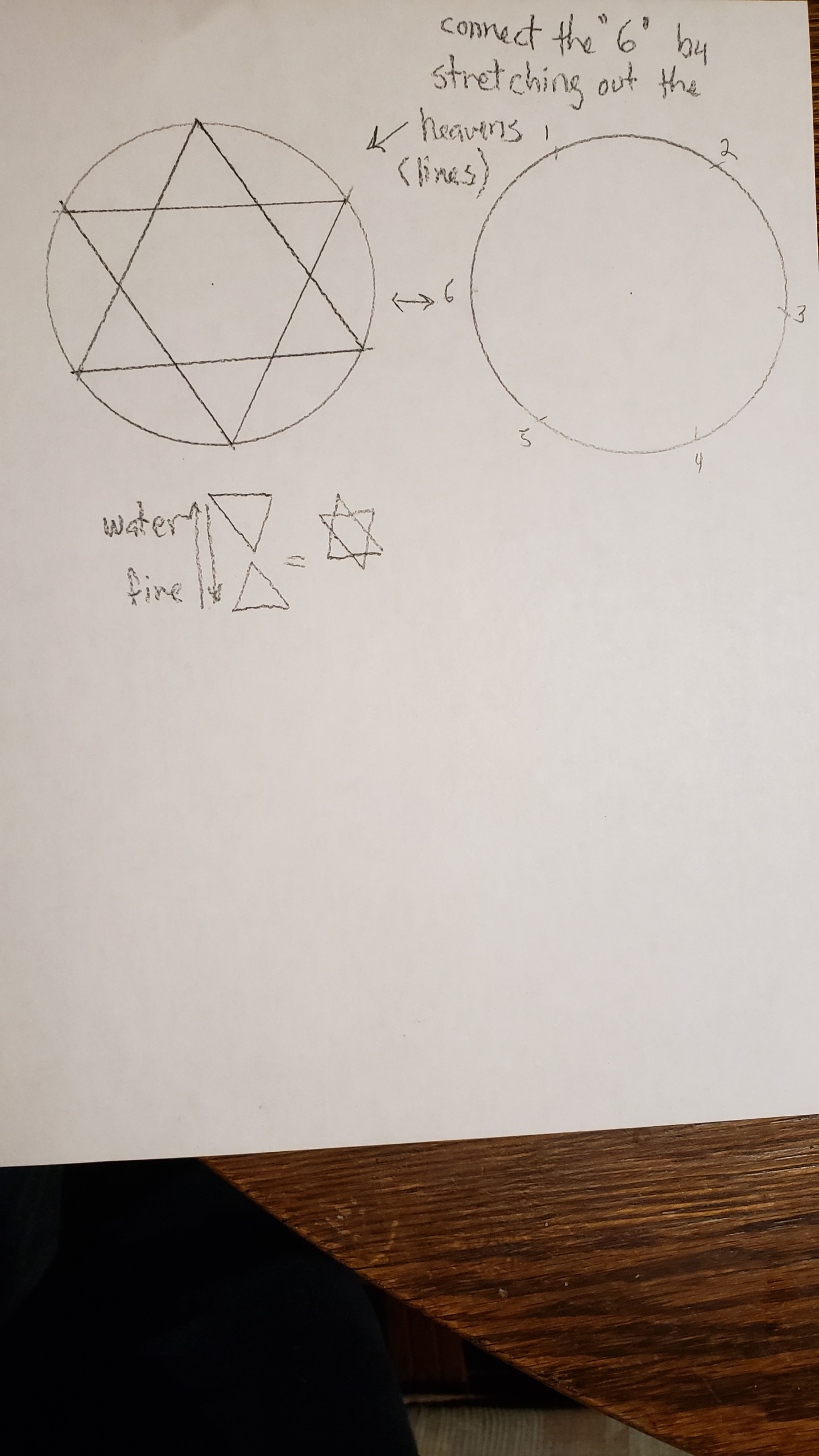