Baha'is observe a Holy Day memorial of the passing of Abdul-Baha in 1921:


The following passage was penned by Bahá’u’lláh, the Prophet-Founder of the Bahá’í Faith, when His son, Abdu’l-Bahá, was finally able to leave their prison city in Israel and visit Beirut.


Praise be to Him Who hath honoured the Land of Ba (Beirut) through the presence of Him round Whom all names revolve. All the atoms of the earth have announced unto all created things that from behind the gate of the Prison-city there hath appeared and above its horizon there hath shone forth the Orb of the beauty of the great, the Most Mighty Branch of God - His ancient and immutable Mystery - proceeding on its way to another land. Sorrow, thereby, hath enveloped this Prison-city, whilst another land rejoiceth.

Exalted, immeasurably exalted is our Lord, the Fashioner of the heavens and the Creator of all things, He through Whose sovereignty the doors of the prison were opened, thereby causing what was promised aforetime in the Tablets to be fulfilled. He is verily potent over what He willeth, and in His grasp is the dominion of the entire creation. He is the All-Powerful, the All-Knowing, the All-Wise.

Blessed, doubly blessed, is the ground which His footsteps have trodden, the eye that hath been cheered by the beauty of His countenance, the ear that hath been honoured by hearkening to His call, the heart that hath tasted the sweetness of His love, the breast that hath dilated through His remembrance, the pen that hath voiced His praise, the scroll that hath borne the testimony of His writings. We beseech God - blessed and exalted be He - that He may honour us with meeting Him soon. He is, in truth, the All-Hearing, the All-Powerful, He Who is ready to answer.

An attempt…should now be made to clarify our minds regarding the station occupied by 'Abdu'l-Bahá and the significance of His position in this holy Dispensation. It would be indeed difficult for us, who stand so close to such a tremendous figure and are drawn by the mysterious power of so magnetic a personality, to obtain a clear and exact understanding of the role and character of One Who, not only in the Dispensation of Bahá'u'lláh but in the entire field of religious history, fulfills a unique function. Though moving in a sphere of His own and holding a rank radically different from that of the Author and the Forerunner of the Bahá'í Revelation, He, by virtue of the station ordained for Him through the Covenant of Bahá'u'lláh, forms together with them what may be termed the Three Central Figures of a Faith that stands unapproached in the world's spiritual history. He towers, in conjunction with them, above the destinies of this infant Faith of God from a level to which no individual or body ministering to its needs after Him, and for no less a period than a full thousand years, can ever hope to rise. To degrade His lofty rank by identifying His station with or by regarding it as roughly equivalent to, the position of those on whom the mantle of His authority has fallen would be an act of impiety as grave as the no less heretical belief that inclines to exalt Him to a state of absolute equality with either the central Figure or Forerunner of our Faith. For wide as is the gulf that separates 'Abdu'l-Bahá from Him Who is the Source of an independent Revelation, it can never be regarded as commensurate with the greater distance that stands between Him Who is the Center of the Covenant and His ministers who are to carry on His work, whatever be their name, their rank, their functions or their future achievements. Let those who have known 'Abdu'l-Bahá, who through their contact with His magnetic personality have come to cherish for Him so fervent an admiration, reflect, in the light of this statement, on the greatness of One Who is so far above Him in station.


He is, and should for all time be regarded, first and foremost, as the Center and Pivot of Bahá'u'lláh's peerless and all-enfolding Covenant, His most exalted handiwork, the stainless Mirror of His light, the perfect Exemplar of His teachings, the unerring Interpreter of His Word, the embodiment of every Bahá'í ideal, the incarnation of every Bahá'í virtue, the Most Mighty Branch sprung from the Ancient Root, the Limb of the Law of God, the Being "round Whom all names revolve," the Mainspring of the Oneness of Humanity, the Ensign of the Most Great Peace, the Moon of the Central Orb of this most holy Dispensation -- styles and titles that are implicit and find their truest, their highest and fairest expression in the magic name 'Abdu'l-Bahá. He is, above and beyond these appellations, the "Mystery of God" -- an expression by which Bahá'u'lláh Himself has chosen to designate Him, and which, while it does not by any means justify us to assign to Him the station of Prophethood, indicates how in the person of 'Abdu'l-Bahá the incompatible characteristics of a human nature and superhuman knowledge and perfection have been blended and are completely harmonized.


When the ocean of My presence hath ebbed and the Book of My Revelation is ended, turn your faces toward Him Whom God hath purposed, Who hath branched from this Ancient Root.

The Will of the divine Testator is this: It is incumbent upon the Aghsan, the Afnan and My Kindred to turn, one and all, their faces towards the Most Mighty Branch. Consider that which We have revealed in Our Most Holy Book: 'When the ocean of My presence hath ebbed and the Book of My Revelation is ended, turn your faces toward Him Whom God hath purposed, Who hath branched from this Ancient Root.' The object of this sacred verse is none other except the Most Mighty Branch [Abdu'l-Bahá]. Thus have We graciously revealed unto you Our potent Will, and I am verily the Gracious, the All-Powerful.

There hath branched from the Sadratu'l-Muntaha this sacred and glorious Being, this Branch of Holiness; well is it with him that hath sought His shelter and abideth beneath His shadow. Verily the Limb of the Law of God hath sprung forth from this Root which God hath firmly implanted in the Ground of His Will, and Whose Branch hath been so uplifted as to encompass the whole of creation. Magnified be He, therefore, for this sublime, this blessed, this mighty, this exalted Handiwork!... A Word hath, as a token of Our grace, gone forth from the Most Great Tablet -- a Word which God hath adorned with the ornament of His own Self, and made it sovereign over the earth and all that is therein, and a sign of His greatness and power among its people ...Render thanks unto God, O people, for His appearance; for verily He is the most great Favor unto you, the most perfect bounty upon you; and through Him every mouldering bone is quickened. Whoso turneth towards Him hath turned towards God, and whoso turneth away from Him hath turned away from My beauty, hath repudiated My Proof, and transgressed against Me. He is the Trust of God amongst you, His charge within you, His manifestation unto you and His appearance among His favored servants... We have sent Him down in the form of a human temple. Blest and sanctified be God Who createth whatsoever He willeth through His inviolable, His infallible decree. They who deprive themselves of the shadow of the Branch, are lost in the wilderness of error, are consumed by the heat of worldly desires, and are of those who will assuredly perish.

- Baha’u’llah, Tablet of the Branch

O people of the world! When the Mystic Dove will have winged its flight from its Sanctuary of Praise and sought its far-off goal, its hidden habitation, refer ye whatsoever ye understand not in the Book to Him Who hath branched from this mighty Stock.

"O Thou Who art the apple of Mine eye!" Bahá'u'lláh, in His own handwriting, thus addresses 'Abdu'l-Bahá, "My glory, the ocean of My loving-kindness, the sun of My bounty, the heaven of My mercy rest upon Thee. We pray God to illumine the world through Thy knowledge and wisdom, to ordain for Thee that which will gladden Thine heart and impart consolation to Thine eyes."

Thou knowest, O my God, that I desire for Him naught except that which Thou didst desire, and have chosen Him for no purpose save that which Thou hadst intended for Him. Render Him victorious, therefore, through Thy hosts of earth and heaven... Ordain, I beseech Thee, by the ardor of My love for Thee and My yearning to manifest Thy Cause, for Him, as well as for them that love Him, that which Thou hast destined for Thy Messengers and the Trustees of Thy Revelation. Verily, Thou art the Almighty, the All-Powerful.

- Bahá'u'lláh, in a prayer revealed in 'Abdu'l-Bahá's honor 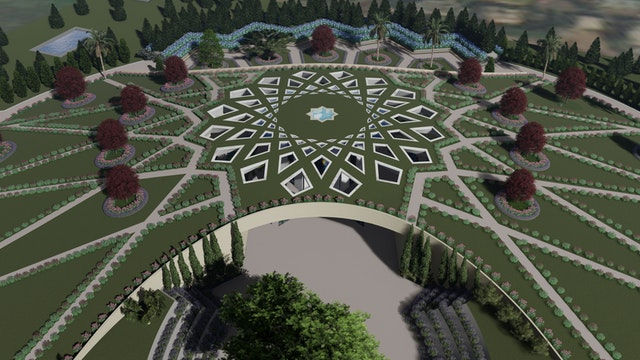 A collection of quotes and prayers from the Baha'i writings on the Ascension of 'Abdu'l-Baha that can be used as part of the Baha'i Holy Day commemoration. Some stories and videos describing this major event in the Baha'i Faith History is also included.